On 12 March Haystacks crossing was exposed, after Brian Richards trolley inspection highlighted a rather nasty twist fault in the crossing. Five of the current User Worked Crossings (UWCs) have timber sleepers under the crossings. 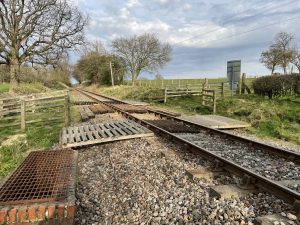 Haystacks was identified as the one requiring most immediate action, so the decision was made to swap out the timbers for concrete sleepers.

The first opportunity to carry this out was the first date the majority of the P Way team were able to return following various COVID restrictions, and the tamper chaps available. The rails were rolled out, ballast dug out with the Kubota excavator, and the old wooden sleepers replaced with concrete sleepers. The rails were reinstated, the joints refurbished, ballast reinstated and hand tamped. The site was then vacated temporarily whilst the Tamper worked its magic. 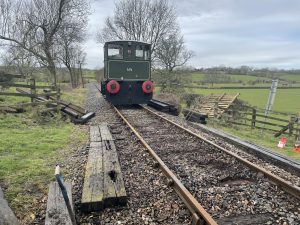 Once tamped, the UWC was reinstated and the site cleared. This goes to show how communication with our neighbourhood farmers is critical, as our friendly land-owner Mr G was fully on-board with the crossing being out of action for this period. Thanks to Paul Rand for his efforts to liaise with Mr G.