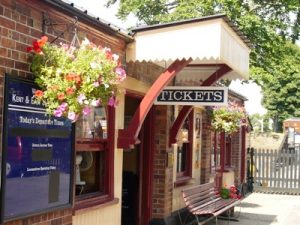 Tenterden is the heart of the present railway & contains most of our passenger facilities, the Colonel Stephens Museum, our Carriage & Wagon Restoration Workshops and last but not least the administrative headquarters of the charity which owns and operates the railway. The original Rother Valley Railway extended up the hill from Rolvenden Station (as now known) in 1903 and further onward to Headcorn in 1905 (abandoned in 1954) renaming itself the Kent and East Sussex Railway in the process.

The station site still shows many signs of this former status as a through station of the original railway. The line still curves towards Headcorn for several hundred yards to provide access to the sidings on both sides of the line. The main building is the second on the site, replacing an early temporary building that was moved to Headcorn within a year or so from opening – a replica of this earlier building now forms our Information Point. The main station is, unusually for a Colonel Stephens building, built of brick with wood infills and externally is virtually as built. 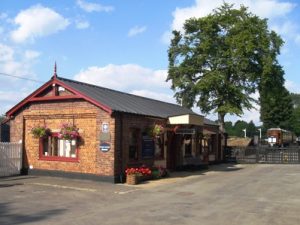 Nearest the road is the Station Office which was the railways operational office when opened (the administration was undertaken at Tonbridge) and which is still used by our Enquiry Staff today, where bookings for the Wealden Pullman and other special events such as Thomas and Santa can be made. Next door is the Booking Office & Booking Hall. Next to that was the Goods Office, which has now been converted to a very interesting Gift Shop. Finally and typically at the end of the building is what was the only toilet on the original station; a gents’ urinal flushed (with typical Colonel Stephens economy) by the rainwater from the gutter! Thankfully this has now been replaced by more modern toilets in the centre of the site.

The platform has been extended from the original main platform but otherwise largely as built and is still lit by lampposts manufactured by the railway at Rolvenden – in a pioneering use of concrete. The Station nameboard is a replica of the original, which is now in the Museum, and is in the original blue enamel as are others on the line. The Locomotive water tower at the platform end is a Southern Railway one formerly at Hoo Junction, Kent.

Facing the platform is the Carriage Repair shed, which was built in the 1980’s but which contains interesting features such as windows and doors from Rye Goods Shed, giving the appearance of an authentic railway building. The yard and viewing area in front of the carriage siding contains the goods yard crane from Hawkhurst station and between it and the Museum is a grassy picnic area with good countryside views. Finally on this side is the all important signal box brought there from Chilham.

Behind the platforms is the siding now used to house our dining train, ‘The Wealden Pullman’ when not in use. Next to this is the pioneering Station Refreshment Rooms, a building moved here from Maidstone where it was probably the first purpose built bus station in the country. It was re-erected by volunteers and even contains the original clock which displays its mechanism inside. Outside are tables & parasols for summer dining and a children’s play area.

Strolling back across the site past the toilets you’ll find the Railway’s administration offices.

The original Tenterden station was on this site when the Railway opened in 1900. Had the original plans for the Railway materialised, this would have been an important junction. As it was it became the K&ESR’s engineering centre with Workshop, Locomotive and Carriage Sheds where minor miracles were performed with primitive equipment to keep the railway running.

Virtually the whole site was cleared in British Railways days and the only remaining relic of the old railway is the concrete water tower at the end of the platform. The site of the original sheds lie under part of the large wood yard on the West of the line and the present locomotive facilities are on the site of the old goods siding on the opposite side of the line. The adjacent fields have been purchased to permit further expansion – a large carriage storage shed was recently erected on one & further development will occur when help and finance permit.

The present railway provided the modest passenger shelter in the Stephens style in 1980. Unusually for British practice trains pass on the loop beyond the platform near the signalbox, which was newly built in 1989 in traditional style. This arrangement was forced on the railway by the narrowness of the site we inherited, but contributes to the functional eccentricity inseparable from a Colonel Stephens railway! 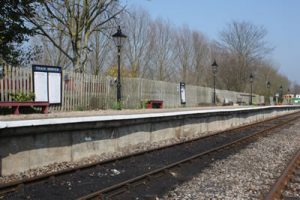 Here, once again, the original station site was largely cleared by British Railways, but for the reopening in 1978 the railway provided a platform using coping stones from Heathfield Station in Sussex. The platform is flanked by railings & the station nameboard retrieved from Cranbrook. The signal box is a Saxby and Farmer type 5 box from Deal Junction, Dover built about 1882 and transported here for the opening of the rebuilt station. The yard is somewhat extended from its old role as a busy agricultural goods yard and is currently used by the Permanent Way Department.

The station building is set at right angles to the line and closely resembles the original, but came from the Cambrian Railway at Borth in Wales. Opposite this building across the station yard is a relic of World War 2. The small Blockhouse was built as an ammunition store for one of a pair of ‘super heavy’ 9.2″ rail-mounted guns that were based on the railway from February 1941 to 8th August 1944. They had a range of some 20 miles and would have been used to fire on the beaches edging Romney Marsh in the event of invasion. 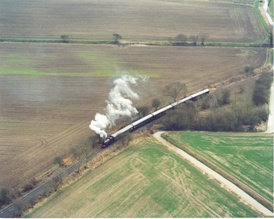 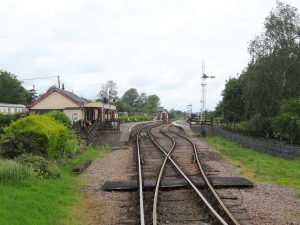 British Railways did not clear this site – probably because there were still hop-pickers’ and other special passenger trains until nearly the line’s closure. Fortunately Northiam and Bodiam retain their original and characteristic Stephens station buildings.

A second building matching the style of the original was built on the platform to house toilets, whilst the station building looks very much as it always did, but the goods office has been altered to form a very useful Tea Room for passengers.

Northiam is now the only station with two platforms. The Wealden Pullman dining train commences its journey from Platform 2 most Sundays throughout the year. Between this platform and the level crossing may be found the railways Remembrance Garden. Tucked away across the present car park (formerly the goods yard) are two original Station Bungalows. These characteristic buildings were used for staff accommodation and are now used as a work base for our building heritage maintenance volunteers (known as the ‘Tuesday Group’).

The signal box was built in 2000 in the characteristic style of a rural branch line. 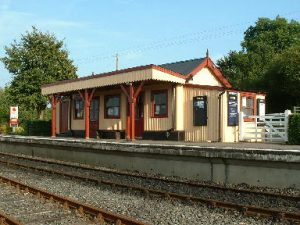 Bodiam Station, our present terminus, is a classic light railway station as realised by HF Stephens.

It has the simplest layout; a run round loop which was mostly used in earlier days as a siding, and one siding (now two) which terminates at a cattle dock.

The building is the same size as Northiam and has been restored to virtually its 1900 condition. It has a small Waiting and Booking area and a larger goods office. At the end of the building is a small lean-to (now used as a staff kitchen) that housed an acetylene gas production plant to light the few lamps on the station. The station lighting has now been discreetly modernised with electricity and exact reproductions of the original lamps.

This station was until 40 years ago completely surrounded by hop gardens owned by Guinness and the station was busy serving this industry and transporting Hop-pickers in season. Today it is even busier bringing passengers to the historic castle.

In the siding at the rear of the platform, you’ll usually find the Cavell Van. This vehicle gained significance when it was used to transport the bodies of Nurse Edith Cavell and subsequently that of The Unknown Warrior for internment in Westminster Abbey. The van contains a fitting tribute to the sacrifices made and is well worth visiting. As an item of national significance, it is occasionally loaned to other organisations – please contact us in advance should you intend making a special visit to the van. We regret that, due its historic nature, it is not accessible to wheelchair users.