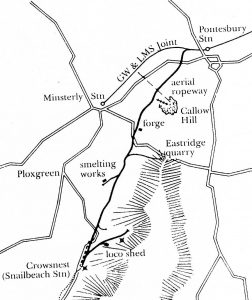 The Snailbeach opened in July 1877 as a 2’4’’ narrow gauge mineral railway to serve the ancient and long established lead mining district along the western flank of the Stiperstones range of hills in Shropshire and in particular the Snailbeach Mine Co.. Envisaged as a full public railway public railway carrying passengers it did not evolve beyond a limited mineral line, running some three miles along the hillside, from sidings near Pontesbury on the GWR & LNWR joint Minsterley branch line, to a terminus at Crowsnest, also known as Snailbeach Station or wharf. From Crowsnest a reverse branch ran, on a gradient of 1 in 25, into the lead mine of the Snailbeach Mine Company. The railway’s locomotive shed was built there.

The line was well and economically constructed and was ideally suited to gravity working of outward minerals. Although there was for many years a heavy inward flow of coal to mine machinery, this layout permitted the inexpensive power of gravity for the heaviest traffic flows. The interchange yard at Pontesbury was in accordance with the best theories of load transfer.

As foreign competition increased the market for English lead declined and mine closures followed. The railway was tied to the ups and downs of the mining and extractive industries and in 1892 the railway for the first, and by no means the last, time actively considered closure.

With an effective manager however and, enough traffic remained to ensure that the railway was reasonably solvent. He promoted an active stone quarry, the Granhams Moor Quarry Co at Eastridge to which a branch opened in 1905. This, and quarry waste processing by a company called Halvans (named after the word for low grade dirty ore and mine waste), was the mainstay of the railway. The railway was kept going though the First World War but was hardly operating from early 1920. The line’s sole surviving locomotive had to be taken out of traffic about this time and the line was reliant for a period on gravity and horse power.

It was at this stage that Colonel Stephens, and a group of his friends, formally took over the company in December 1922. In practice it became virtually Stephens’ personal property, and he set about re-equipping it. Much of the ‘main’ line was re-laid with 45lb rail and second hand sleepers. Three ex-government locomotives were acquired and converted to Snailbeach gauge; a Kerr Stuart ‘Skylark’ Class 0-4-2T and two of the War Department surplus 60cm gauge Baldwin 4-6-0Ts, also used by Stephens on the Ashover and Welsh Highland lines.

Although initial traffic results were disappointing, Stephens was ultimately successful in his reconstruction. Steady traffic from the old mine tailings near Crowsnest, together with fluctuating quantities of barytes from the mine itself, accounted for the bulk of the line’s carrying until 1928. Then the tide turned with the opening in 1927 of a new road stone quarry at Callow Hill and from then on the railway enjoyed a modest prosperity. Stephens initially seems to have had plans to start a passenger service and looked to build a half-mile extension to Pontesbury station and made enquiries about suitable carriages, but it was not to be. 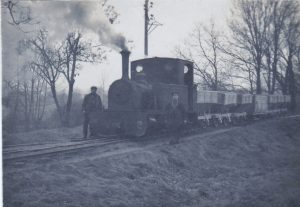 Shropshire County Council took over the Callow Hill quarry in 1931 and erected a tarring plant at Pontesbury, creating an efficient unit for the supply and delivery of road making materials. By this time Austen was manager and engineer, and indeed as one of Stephens’ legatees and therefore part owner. He tried to dispose of the railway to the Shropshire County Council but was unsuccessful.

With World War 2, as the county council was forced to cut back on road repairs. The railway had become dependent on their traffic and the modest prosperity disappeared .By the end of the War the company was nearing the end of its operational life, actively considering closure in February 1946 followed closely by the simultaneous failure of all three locomotives by a boiler inspector in July. The Snailbeach was without motive power, so an agricultural tractor was hire to haul the empties back to Callow Hill from then on.

On 14th April 1947 Shropshire County Council leased the Pontesbury to Callow Hill section, continuing to use tractor operation. By1959 road access had been provided to Callow Hill Quarry (which is still in production today) and the remaining section of line fell out of use.

The Snailbeach District Railways Company however remains in legal existence to this day.