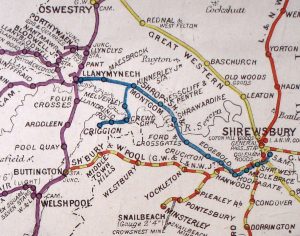 This line originally proposed as part of an overambitious Potteries, Shrewsbury and North Wales railway (known as “the Potts”) which was only partially built. It was opened from Shrewsbury to Llanymynech in 1866 with a branch from Kinnerley to Criggion. Penury followed and services were suspended in 1880. Ownership passed to the Shropshire Railways Company but their reconstruction efforts were aborted and it slept for 30 years. In 1907 Holman Stephens promoted a light railway order and it was reconstructed and reopened in 1911, trading as the Shropshire and Montgomeryshire Light Railway. Passenger services ceased in 1933 and the railway began to fade away again, only to be resurrected, reconstructed and operated as a largely military railway in World War II. It finally closed in 1960.
Stephens’ line of 1911 re-used the formation, stations and much of the rail of the defunct Potteries, Shrewsbury & North Wales Railway. That line was to have linked the places mentioned but never did so, opening between Shrewsbury and Llanymynech in 13th August 1866. Probably also opening about the same time for goods extensions to Llanyblodwell and Nantmawr Quarry and a branch line to Criggion, sometimes known as known as Breidden. Promoted and built at an outrageously inflated cost by a rather dubious contractor, Richard France, who promptly went bankrupt, the company succumbed to financial troubles in December 1866, and traffic ceased on 21st December of that year. The Shrewsbury – Llanymynech section reopened to passengers in December 1868 with that to Llanyblodwell following in April 1870, with the Criggion service commencing in June 1871. Intermittent quarry traffic and limited passenger traffic caused recurring financial problems and consequent neglected maintenance. Government concerns about the state of Melverley Bridge triggered the directors to close the whole system on 22nd June 1880. An abandonment order was sought in Parliament but only passed with a proviso that the railway remain intact, which largely accounts for its continued survival in a derelict state. Importantly, in 1881, an agreement was made with the Cambrian Railways on the use of the Llanymynech to Nantmawr line to maintain access to the quarry; something that was to have continuing adverse affects on the viability of the rest of the line.

After prolonged discussions a new company called Shropshire Railways was formed by statute in 1888 to take over the existing line with high ambitions for rebuilding and extending the line to the Potteries, and indeed further into Wales, as originally intended back in the 1860s. The Shropshire Railways company soon mired itself in financial and constructional disputes. A start was made on relaying the track in early 1891 but the contractor stopped work in July amidst considerably acrimony. The financier J H Whadcoat, then effective controller of the company, put the railway into receivership once again.

The Shropshire Railways continued in enfeebled form. Apart from a meeting in 1900 the Board was not active till 22nd November 1906 when the Board were at last considering selling off the rails and other fittings. However at the same meeting Whadcoat announced that he had been approached by Holman F Stephens. This was the start of what turned out to be a complex but successful proposal to revive the line.

Stephens formed a further new company, initially to be called the North Shropshire Railway but altered to the Shropshire and Montgomeryshire Light Railway, to become the operating company which leased the property from the Shropshire Railways. Work commenced from the Llanymynech end in late 1910 consisting largely of clearance and replacing all the sleepers. The connecting mainline companies proved extremely obstructive. At the eastern end they refused entry to the main Shrewsbury station (as they had since the 1860s) and goods interchange arrangements were completely changed, with the old junction to the Shrewsbury to Wolverhampton abandoned and a new interchange site created at Meole Brace on the Welshpool line. At the western end things were even worse; the Cambrian refused to allow the new company access to the line to Nantmawr quarries with severe effects on future revenue . Access to the important Criggion Quarry was now vital and work on reconstructing the branch, which had been deferred for lack of finance, was commenced, using direct labour, in mid 1911. The branch reopened for mineral traffic on 21st February 1912 and for passengers on the 27th July.

With considerable rejoicing the formal reopening of the main line had taken place at Shrewsbury Abbey (sometimes called Abbey Foregate) on 13th April 1911. The economically reconstructed railway settled down to modest prosperity for a few years. However the Great War and the introduction of bus services in the sparsely populated area dealt the railway blows from which it could not recover. Despite busy traffic in minerals from Criggion, the regular passenger service on the branch faded and died in 1929. Stephens had introduced one of his Ford Railmotors to stem the loss on the main line, but the regular passenger service was withdrawn on 6th November 1933.

Criggion quarry traffic received a boost in the early 1930s supplying national building contracts. With the continuing recession in the 1930s this traffic boost was short lived and the operation reverted to a daily goods only service. Apart from occasional holiday excursions, which finished in 1937, passenger stock was left to slowly rot. 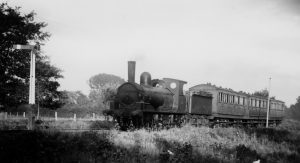 A new life for the railway now emerged. With the coming of war on 1st September 1939, the railway the railway was swept up by the Military’s decision to build extensive munitions depots in the area .The railway was leased to the War Department formally from 1st June 1941 but in practice from the previous January. The line became extremely busy, requiring extensive new yards, including a new interchange point at Hookagate, and the mainline was extensively re-laid. Even with the coming of peace the depots remained busy but the line itself was nationalised as part of British Railways in 1948. With the new regime general goods services on the Criggion branch ceased on 2nd May 1949, after which the branch became effectively a siding operated by the quarry shunting locomotive. Visually the rest of the line had become a military railway.

The need for military depots declined in the late 1950s and the decision to close the whole line was made with the line closing at the beginning of 1960. All track was lifted by 1962, apart from the oil depot sidings at Shrewsbury, which had been given a new connection with the Severn Valley line in 1960. This remnant remained in use till 1988 and was lifted soon after. The platform and station building remain on the edges of an extensive car park under which may even lay the remains of the original station of 1865. The line remains very much in local folk memory as ‘The Potts’ and even the new road built over the track bed in the town bears the name ‘Old Potts Way’.