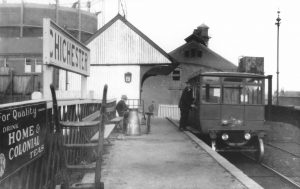 Colonel Stephens was engineer and subsequently manager and, latterly, effectively owner of this railway. It was opened in 1897, without benefit of legislative sanction, from Chichester to Selsey Town. Generally known as the Selsey Tram the railway suffered greatly from road competition after the early 1920’s. Perhaps the most ramshackle of Stephens’ lines due mainly to the previous owners under investment, it closed in 1935.

The Hundred of Manhood and Selsey Tramways Company was registered in April 1896 to build a railway from Chichester to Selsey. Incorporation without statutory backing was unusual and it could only be built because the land used was privately acquired and the roads were crossed by consent of the local roads authority.

Holman Stephens had been appointed the engineer at some point before incorporation of the company and he built the railway across the essentially flat land in accordance with contemporary thinking on Light Railway construction. Construction and land purchase costs were extremely modest commencing early in 1897 and using lightweight flat bottomed rail and rolling stock of the simplest kind. The stations were in Stephens’ embryonic but characteristic style. The only engineering feature of note was a lifting bridge over the, then nearly defunct, Chichester canal.

The line opened on 27th August 1897 and was extended a further half mile from Selsey Town station to the Beach in the following year (an extension closed by 1908). Receipts soon reached a very satisfactory level and the Edwardian period was one of prosperity .However the opportunity was not taken to invest to reconstruct the railway to higher standards, as would have been expected by light railway adherents.

In 1913 the directors proposed a light railway extension from Hunston to West Itchenor and East Wittering. The Order would also regularise the legal status of the existing line (to be called the West Sussex Railway) and to improve the line. The Order was agreed but the outbreak of the Great War delayed its granting until 1915 and no action could be taken due to the War. 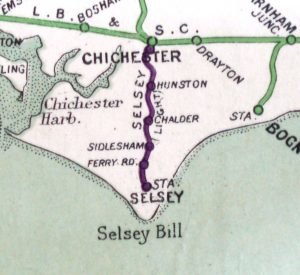 Holman Stephens had remained engineer to the line although the management of the railway was in other hands. The controlling person from 1907 seems to have been Edward Heron – Allen whose principal interest was the promotion of Selsey as a resort (to which the Tram vastly contributed). Heavily reliant on passenger traffic, which was light during the War, the Tram was rapidly becoming a run down, decrepit railway. Relationships at management level seem to have been less than easy with Stephens all too aware of the under investment. Matters came to a head during 1919 /20 and new owners, prompted by Colonel Stephens, bought the company.

New steps were taken to give the Tramway some legal status. A novel legal certificate authorised a new West Sussex Railway Company to take over and reconstruct the line. The proposed extension to Patcham and Bognor, and also Wittering, was pursued but a Light Railway Order was never issued. The new Company was also empowered to enter into agreement with the Southern Railway with regard to the re-construction, working and management of the line.

With the death of Stephens in 1931 the company, facing increased competition from improved buses, seemed to lose heart. W H Austen made an attempt to get the Southern Railway to take over and reconstruct the line but after a detailed survey they declined to do so. The directors therefore decided to close the line which was effected on 14th January 1935.