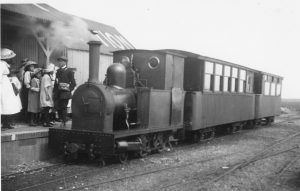 This was the first fruit of Stephens’ independent career and he, with his lifelong assistant W H Austen, planned and built this little three-foot gauge narrow gauge railway to carry golfers and holidaymakers over the marshes and dunes for the two miles from Rye to Camber. It operated successfully on a shoestring from its opening in 1895 till closure the day after World War II was declared in 1939. Used intermittently by the military during the war it was finally torn up in 1946.

The Tramway was never a formal part of the group of railways managed by Stephens and Austen. They continued to be engineers to the line and generally advised and influenced the tramway but were not involved with the general running of the line.

Built primarily to connect to Rye, where most of its users lived or stayed, to the newly created Rye Golf Club at Camber, the line also served the fishing community and, increasingly, trippers wishing to visit the magnificent Camber sands. It was opened to the public on 13th July 1895, only two days after the arrival of the first locomotive and carriage. The Tramway celebrated its 13th birthday by opening a half mile extension onto the foreshore of Camber Sands, a line which was to be diverted at its far end for the last few months of its existence.

In building the line Stephens demonstrated great energy for it took only 14 weeks from the establishment of the company till opening. The process was materially assisted by the use of leased land, obviating the need for legislation or government approval. After experience with the Cranbrook & Paddock Wood Railway station buildings, Stephens adopted their style, which became synonymous with his work in the years to come.

From the earliest years the Golf Club, and other clubs in Rye, paid a small subsidy to cover the losses incurred by winter running. By the early 1920s, however, the Tramway had outlived its usefulness as far as the Golf Club was concerned, for affluent golfers decamped to their motor cars. The subsidy was last paid in 1925 and thereafter the line operated in the summer months only, having slowly evolved into a pleasure line for visitors to the sands. 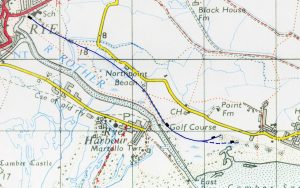 From opening, the railway had been operated by a tiny steam locomotive with one carriage and some wagons and they were soon joined by a second engine and carriage. Stephens had initially hoped to work the railway with an internal combustion engine driven tramcar but this proposal proved premature. His ambition was finally realised in 1924 by the purchase of a small petrol locomotive of the ‘Simplex ‘ type that had been used so successfully in the trench railways of the Great War. This locomotive, built, or more probably rebuilt from a wartime machine, by Kent Construction at Ashford, took over virtually all services.

With the declaration of the Second World War on 3rd September 1939 the summer season came to an abrupt end and the Tramway carried its last paying passengers on the next day, a Sunday. On 12th December 1942 the Navy moved in and started to operate the line to improve the east side of Rye Harbour. They de-requisitioned the Tramway on 18th May 1945 but the Company decided not to reopen and by September set about disposal and dismantling.