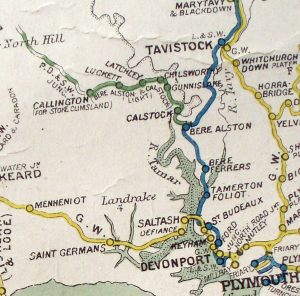 The railway with this title was one of two halves; the first was built to get the London & South Western railway independently into Plymouth and was opened as part of their main line in 1890. Separate interests within the company promoted a branch from Bere Alston to join with and re-gauge the narrow gauge East Cornwall Mineral railway line to Callington. Stephens oversaw the reconstruction and equipment of the new line, which opened in 1908, but he resigned in 1910 due to pressure of other work.

Like many of Stephens’s projects this line has ancient roots, but it is unique for him in being a reconstruction and extension of a narrow gauge line. That railway, the East Cornwall Mineral Railway (ECMR), served the East Cornwall mining area around Gunnislake and Kit Hill, where there were lodes rich in copper, tin and arsenic, and its surrounding rich agricultural area. Opened on 7th May 1872 as a 7 mile long 3ft 6in gauge line from Kelly Bray to the Calstock quay on the River Tamar. The Plymouth, Devonport & South Western Junction Railway, a line heavily backed by the LSWR in its attempt to reach Plymouth, and always worked by them, was successful in opening in 1890. The Company was required to acquire the ECMR and connect to it.

Nevertheless the ECMR trundled on until further powers were obtained in 1900. The LSWR’s long standing consulting engineers Galbraith & Church undertook all the initial work, including the specification for the necessary connecting Viaduct over the Tamar. The contract for this work was placed in March 1904 with a relatively inexperienced contractor from Liskeard, John Lang. Shortly before, in February 1904, the Galbraith & Church, asked ‘to associate themselves with Mr Holman F Stephens for the construction of the light railway’. So began Stephens’ involvement and he was to remain actively involved for the next six years. His influence was soon apparent for the Board decided in April 1905 to use standard rather than 3’6” gauge. 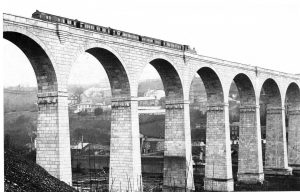 The magnificent twelve-arched viaduct at Calstock entrusted to Lang was constructed of concrete blocks and has twelve arches, each of 60ft span. The rail level is 120ft above river level. It is clear that the design and concept was squarely with Galbraith and Church although the use of concrete blocks was unusual for such a long established and essentially conservative firm. The die was cast before Stephens came on to the scene, though he was actively involved in overseeing the work .The end result was a lasting credit for all concerned and Stephens proprietary interest in the viaduct was clear from a photo he kept on his office wall.

The LSWR refused to work the new branch, so Stephens was asked in October 1905 to obtain the necessary stock. In its enthusiasm the company underestimated the speed of construction of the viaduct and ordered its rolling stock too early and indeed in too great a quantity. Eight carriages, some wagons and a converted locomotive had been disposed of within a few years.

By December 1907 all the trackwork was laid, and the branch opened on 2 March 1908. All the stations were classically Stephens’s and demonstrated his firm stamp on detailed constructional and operational features. In July 1908 Stephens’ was appointed as engineer and manager with a salary of £250. Stephens was very committed elsewhere by this time and in June 1910, still valued by the Company, his appointment was terminated.

The PD&SWJR lost its independence in 1922. From 28th February 1966, freight trains were withdrawn and the Callington branch was closed completely beyond Gunnislake from 7th November 1966. A Gunnislake–Plymouth via Bere Alston passenger service was retained and still continues. The last survivor in the national network of all the Stephens influenced passenger light railways.