This was the quintessential Stephens’ light railway and was always the heart of his empire. Conceived as the Rother Valley Railway, it opened from Robertsbridge to Rolvenden station (then named Tenterden) in 1900 and subsequently on to Tenterden Town in 1903. Despite legally authorised extensions over much of the Kent Weald to Maidstone, Rye and Cranbrook, lack of capital meant that only an extension to Headcorn was to be built and opened in 1905. Serving a deeply rural area it was initially profitable but suffered severe road competition from the early 1920s. Only track relaying and imported motive power during World War II and at nationalisation in 1948 saved it. Passenger traffic and the operation of the Headcorn extension ceased in 1953 and the railway closed completely in 1961.

Tenterden had yearned for a railway connection for many years but finally received a connection in 1900.The origins of the line seem, in fact, to lie elsewhere than Tenterden. The impetus seems to have come from landowners and businesses in Northiam and Bodiam in late 1894. The railway was authorised by its own Act of Parliament in 1896, but with the passing later that year of the Light Railways Act, the directors obtained permission to bring the RVR under that Act for construction and operating purposes.

By Victorian standards construction progress was slow. Difficulties in raising capital caused delays. Construction work commenced in 1898 but there were delays with contractors’ bankruptcy and it was not until 9th January 1900 that the line was reported complete. Bad floods probably delayed the opening of the line, which finally opened to goods traffic on 26th March and to passengers on 2nd April. On 16th March, 1903 the existing Tenterden station was renamed Rolvenden and the line extended 1½ miles to a new terminus at Tenterden Town.

Simultaneously the South Eastern & Chatham (SE&CR), decided to rid itself of an obligation to build its long envisaged line to Tenterden. The RVR agreed to build and operate a line to Headcorn, in return for a financial guarantee to make up any losses. On12th March 1903 a contract to build the Headcorn and upgrade the Rother Valley line was signed, a wise upgrade to meet a successful increase in traffic. The line from Headcorn Junction was opened on 15th   May1905 but the expansion programme had come to an end. Heady ideas of commanding enough finance to build lines to Rye, Cranbrook and Pevensey, all authorised over 1898-1900, together with Maidstone in 1905-06, faded.

In 1904 (officially on 1st June), the new title Kent and East Sussex Railway (K&ESR) was adopted, The railway had been an operational and commercial success, but it was probably fortunate that much of the wider network was not built.

When this extension fever was over, the K&ESR was established as a growing and mostly profitable concern. In 1910 the decision was undertaken to upgrade the rolling stock to more comfortable steam-heated stock and obtain more locomotives. The second-hand replacement stock obtained was at the time superior to virtually everything available on most rural branch lines. Indeed in the provision of steam heating it was in advance of many main lines. Ten years later it might be a very different story but before the Great War the K&ESR was seen as a progressive, and indeed model, light railway that served its community with distinction.

As the Great War came to an end the Government decreed that the railways be re-organised into large private companies generally known as ‘The Grouping’. In large part by pressure exerted by Stephens and his associates, it was decided to permit Light Railways and the K&ESR did so. However the world was in rapid change as ex-army motor lorries and buses flooded the transport market.

To compete for passengers Stephens then brought in some railmoters to supplement the existing somewhat minimalist steam services established during the Great War. The battle was however lost; in 1913 105,000 passengers were carried; by 1919 the figure had dropped to 85,000; and to 68,000 in 1922. The remaining passenger traffic continued to drop and, most importantly, the profitable general merchandise traffic followed. By the 1930s it had lost much of the traffic it had been built to carry. General agricultural traffic could be considerable, but was very seasonal. The K&ESR settled into a period of greater quietude, useful primarily to the farmers and small tradesmen in the locality, as well as those travellers who were not on a bus route. Only in the brief hop-picking season did the bustle return as the hop-pickers and their friends arrived from London for their annual invasion.

These changes reduced the line’s profitability dramatically. The Rother Valley section would always show a favourable margin, however small, but losses on the Headcorn extension climbed to catastrophic levels which, even with the mainline subsidy, could not be sustained. The railway went into by receivership in 1932. With some additional help from the mainline railways in the form of deferred debts, it continued. Formerly a model of its kind the K&ESR was now perceived as a run-down decrepit railway of the greatest charm.

With the end of the War, the Transport Act 1947 took powers to acquire all railway undertakings and this spelt the end of the independent K&ESR and indeed its partial closure. As early as April 1948 it was considered for closure but ‘it was generally considered that [closure] would not be a good policy to adopt so soon after the nationalisation of the railways and would bring forth an outcry from the public’.

Limited efforts to improve and integrate the K&ESR into the national system soon come to an end and the writing was on the wall for closure. The decision was taken to shut down the passenger service and retain the goods service on the old Rother Valley section only. The passenger railway finally came to an end on Saturday 2nd January 1954. 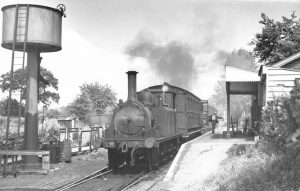 The Rother Valley section continued for goods with one morning and one afternoon service. In the hopping season special passenger trains commenced running to Northiam and continued at weekends for the three week season. Such workings continued on a diminishing basis until the 1958 season.

Traffic began a further decrease in the wake of the disastrous ASLEF strike of June 1955, and, after 17th October, only the morning service continued. The end was in sight and traffic decline was now steep. The final working was the 7.55 am working from Robertsbridge on Saturday 10th  June 1961 followed the next day by a rail tour. However preservation as a Heritage Railway beckoned.