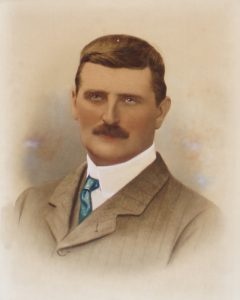 His father was Frederic George Stephens, the celebrated art critic and founder member of the Pre-Raphaelite Brotherhood of Victorian artists and his mother Rebecca Clara. The young Holman Stephens, always called ‘Holly’ in the family grew up in a busy and close household together with his elder half sister ‘Lottie’.

One of his earliest known gifts from his father was that of a working model of a railway engine which survives to this day in the Museum. Whether this reflected Frederic’s own interest in railways (he undertook some railway surveying work as a student in the 1840s), or his son’s emerging interest it is impossible to say.
At first privately educated he attended his father’s old school, University College combined with language learning in France and Germany. His interest in the military began early and by 1886 and 1887 he was already making enquiries about joining up as a volunteer, and seems to have joined the University College cadet force.

Holman Stephens was physically impressive reaching 6’2” at the age of just 15; a striking figure, instantly recognisable, with a military bearing. In private life he was a bachelor of the old school and became an enigmatic, even an eccentric, character, perhaps an arrogant man, but more than offset by immense personal charm and wit. Much admired and liked by his staff; there are many tales of generous tipping and other courtesies for staff he clearly admired. On the other hand many of the time-worn methods adopted by some of the railways and staff he took on exasperated and infuriated him. The fact that a job had always been done in a certain manner was always calculated to arouse his wrath. He was also inclined to bring in staff that he trusted and several key appointments were filled with staff he transferred, often from Kent, and would go out of his way to secure and retain trusted staff.

The eminent transport journalist, Charles Klapper, recalled that Stephens was one of the best of conversationalists; one had no time to be bored, for he produced such a variety of interesting topics that he not only touched on but went into great depth. Testimonies after his death in the official minutes of some of his companies read warmly; the Shropshire and Montgomeryshire minutes for instance recording his death with ‘deep regret [he was a] man with a striking personality, a very warm heart and this was best exemplified by his unbounded hospitality’. Further, much can be read from a remark he made asked why he continued to run so many ‘unlikely’ railways he replied ‘I don’t make a lot of money out of my lines, but I do get a lot of fun’

As an adult, Stephens had never really settled down. In order to oversee his railways in Kent and Sussex he took rooms in Robertsbridge and Tonbridge. He was said not to have used his clubs (the Reform, the Eccentric and the Royal Automobile Clubs) for stays in London but he certainly used these for his social contacts. Otherwise, constantly travelling to and from his railways, both built and planned, he lived on the move. He would usually put up at a comfortable hotel in a nearby town from where he would make visits to the line often by hired motor car. He had a splendid, well engineered, car as one might expect from an early full member of the Royal Automobile Club, but he never drove and had a driver. Latterly, he retained rooms at the Lord Warden Hotel in Dover, from where he travelled to his office in Tonbridge, or wherever else in the country he needed to go. Nor did he ever let go of Hammersmith Terrace. His parents had moved next door to No.9 in 1905 and his mother remained there until her death, but although Stephens auctioned the contents, or some of it, shortly afterwards, he retained the property as a store, particularly for artworks that had been in his father’s possession.

At the end of January 1930, Stephens suffered a stroke, which affected his speech and movement. But on 23rd October 1931 he was found dead in bed at the Lord Warden Hotel, having suffered a fatal heart attack.

Stephens’ funeral was held at St. Peter’s Church Hammersmith; just round the corner from what had been the family home in Hammersmith Terrace with internment in the family grave at Brompton Cemetery next to his father’s parents. His funeral was attended by many prominent railway and military people.