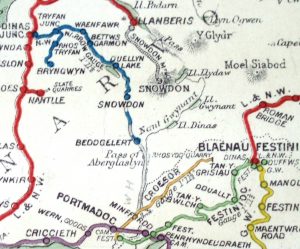 In the last few years of the 18th century, a William A Madocks carried out land reclamation projects in North Wales culminating in the great embankment – ‘The Cob’ – across the Glaslyn estuary, creating a new harbour that he called Portmadoc. Nearby, around Blaenau Ffestiniog, slate deposits were being exploited in small quantities.

Engineer James Spooner constructed the Festiniog Railway, which enabled loaded slate trains to run down by gravity from quarries to Portmadoc while the horses were used to haul the empty wagons back. The gauge was 23 ½ inches as used in the quarries. To increase capacity Charles Easton Spooner (James’ son) introduced steam locomotives in 1864/65.The Board of Trade gave the Railway permission to run passenger trains, the first on a narrow gauge in Britain. The ability of the narrow line to transport goods and passengers became something of a world-wide phenomenon and influenced the widespread adoption of sub-standard gauge railways. The Festiniog Railway evolved into sophisticated railway with many of the trimmings of its mainline brethren.

New roofing materials and a series of disastrous strikes hastened the decline of the slate industry and with the introduction of standard gauge lines to the area by 1900 the line began a slow decline. The loss of its export trade from Portmadoc in World War 1 and general wartime conditions reduced the line to a very poor state by the early 1920s and management action to reduce costs was slow.

New ownership brought the Festiniog into the same management as the North Wales Narrow Gauge Railways a struggling line from Dinas (near Caernarvon) to Rhyd Ddu with a branch to Bryngwyn opened in 1877 but closed to passengers under World War I conditions in 1916. A long planned a very much extended railway through to Portmadoc was constructed over existing, partly finished earthworks, and the Creosor Tramway. By 1923 the rechristened Welsh Highland Railway was approaching completion. However the new management was already in trouble with the foundering slate industry and buses were already creaming off daily passenger traffic leaving a limited summer tourist traffic. The Festiniog was already in the financial mire and the Welsh Highland seemed likely to follow.

Although the new railway had been planned and built without benefit of his advice, Colonel Stephens was hovering in the wings and had been noted in North Wales as early as 1918. With the anticipated completion of Welsh Highland construction work by McAlpines on 31 March 1923, a new engineer was needed. The directors turned to Stephens who was appointed on 1 April. Although Stephens influenced its equipment the Welsh Highland Railway was built before Stephens could seriously alter its engineering features. The steam engines had been in disrepair since the War and although he introduced some pioneering internal combustion efforts finance soon dried up.

Colonel Stephens took over as Chairman and Managing Director from January 1925. Although used to dealing with railways that were short of capital, the poor state that the FR had drifted into, combined with old established work practices and an under-resourced Welsh Highland, left him with an uphill task in dealing with a massive increase in road competition. There was soon insufficient winter traffic to justify any passenger service at all. Winter services on the new line never took off and all except the morning and evening quarrymen’s services on the Festiniog ceased on the 24th March 1930. 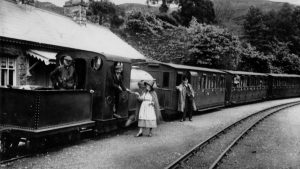 Stephens and Austen bought in very necessary management skills and probably saved the railway from premature closure. They were however only partially successful in reversing decay. Adept at cost control and building tourism traffic they were however able to ensure that the railway survived a critical period, Austen resigned in 1936 in protest against the Board’s unwise economies. Losing a promising tourist trade because of World War II the railway finally closed in 1946.

Resurrected in a pioneering effort by enthusiasts in the early 1950s, The Festiniog has been refurbished and re-routed in part to become a highly successful preserved railway.

For all its short life the Welsh Highland struggled with insufficient resources and little goods traffic and closed in 1936, after which it was dismantled. A long held dream of enthusiasts to rebuild the line finally began to be realised in the 1990’s, and the complete route reopened in 2011. A fine new railway operationally, it bears little relationship to the old.