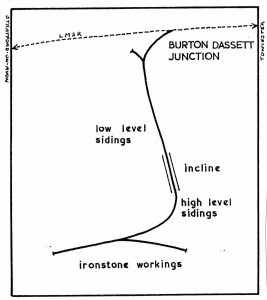 This 3.5 mile long ironstone carrier was engineered by Stephens in 1919 though he formally severed his engineering connections before construction The line’s working life started in 1922 with a 1 in 6 cable-worked incline in the middle but it never officially opened and intermittent activity ceased in 1925 as the ironstone deposit was uneconomic. The line was severed in WW2 for an army ordinance depot and the stock and the remaining line rotted away until torn up for scrap in 1946.

The Edge Hill Light Railway was formed to exploit the large ironstone reserves which lay just under the surface on the Northants / Oxfordshire border at a time of the enormous demands of Word War 1. The driving force behind the proposal seems to have been the proprietors of the Stratford on Avon and Midland Junction Railway who saw it as a means of increasing traffic on their railway.

Stephens’s drew up plans and he wished to tackle the principal problem of building the railway, that of surmounting the 300 foot high scarp, by proceeding diagonally up the slope to lessen the gradients, a proceeding planned for several of his projects notably the Headcorn – Maidstone line. However this was soon scotched on the grounds of cost. The result was a most unlikely railway for Stephens; 11¼ miles of railway, from a triangular junction with the SMJR at Burton Dassett and after two miles a rope-worked incline was followed by three branches serving different parts of the ore field.

In August 1917 an application for a Light Railway Order was submitted. After a public enquiry, the proposals were scaled down to a total of 5 ½ miles, finally approved on 17 July 1918.

Once the Light Railway Order had been obtained and probably early in 1919, Colonel Stephens seems to have stood down as engineer although many see his influence in the acquisition of the two Terrier engines (which arrived in 1919 and 1920) and the only other mainline rolling stock, two ex GER ex-Army brake vans.

Construction of the Railway began sometime in 1919 but construction work was very slow. During construction some limited traffic had developed after the incline was finished in summer 1922, as construction was through usable ironstone under a light overburden. The incline was still only partially completed but plant could now reach the top. These small beginnings soon came to an abrupt halt. On Tuesday 10th October 1922 a directors’ inspection took place in connection with the incline mechanisms. However the rake ran away the wagons on the counterbalancing rake came hurtling over the top, killing the engineer. 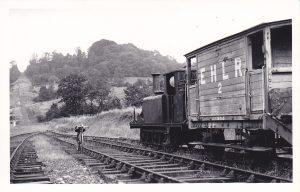 The incline was not repaired and that traffic ceased though lines and stock remained. The coup de gras did not come however till WW2; the lower part of the line was removed by June 1942 for the construction of a vast ordnance depot, now called Long Marston. The locomotives were then hopelessly isolated and the main line connection gone though not all cut till spring and summer 1946.