This 21-mile long railway was progressively opened between 1859 and 1891 as a coal carrier, and Holman Stephens was employed as a consultant in 1908 to reconstruct it to legalise its unofficial carrying of passengers. Stephens supervised re-construction and re-equipment over the years up to 1913 after which he had no further connection. 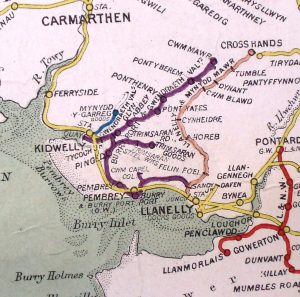 The railway was grouped with Great Western Railway in 1922. Passenger traffic lasted until 1953. Coal traffic continued until 1996.

The Burry Port and Gwendraeth Valley Railway was built largely on the line of an earlier canal and its connecting inclines. Although bankrupt and run down for many years, it was an essential lifeline for the collieries it served and they pressed for something better. However it took a clash with the authorities over unauthorised passenger traffic before it stirred itself slowly into action, recruiting Stephens who helped to transform the line into something of a model carrier.

After an accident in 1903 Mr Arthur Morgan, the very capable General Manager of the Railway, explained to the Government that his Company were running workmen’s trains up and down to the Collieries each day and that people other than workmen were travelling. They remarked that if any fatal accident occurred a great deal would depend upon the verdict of the jury (implying that the railway company would be liable) but the Board took no action saying that it had no money to effect improvements.

However with improving finances and steady increases in traffic the railway began at last to seriously consider putting its house in order and in March 1908 agreed to ‘consider’ the matter and obtain a Light Railway order and reconstruction of the line both for passengers and overall greater efficiency. They resolved that an ‘Engineer of experience …should be consulted’. By their next meeting in May they had called in Holman Stephens who, with his customary speed and efficiency, reported to the July meeting.

As an existing railway wishing to improve its facilities and with Stephens at the helm the necessary Light Railway Order went through very smoothly. It was submitted in November and granted in February 1909. Preparations had already commenced and Stephens had undertaken the detailed survey and made recommendations as to stock etc. With the legislation in place the line was rapidly and extensively reconstructed in the classic Stephens style. The cost had been estimated at a very reasonable £8500 and came out at £8656, a tribute to Stephens professionalism .The line was opened for passenger traffic on August Bank Holiday (2nd August) 1909 and was a great success.

During the reconstruction period the Board had been under great pressure to extend the improvements and passenger service to Cwmmawr.
They deferred the decision, only to return to it in June 1910 following consultations with Stephens. This matured into full plans and specifications in March 1911 and another LRO submitted. Stephens appears far from keen on this extension for the work went against his basic light railway engineering instincts. The original line had severe gradients, variously reported but probably 1 in 32 with, in parts, 1 in 14 and 15; difficult even for mineral traffic operation and quite impossible for passenger traffic. Reconstruction needed extensive earthworks with a cutting one-quarter mile in length and reconstruction for 1,000 yards or more with the embankment raised 30 feet above the old trackbed. Stephens suggested reviving an earlier projected line north to the LNWR Carmarthen line at Llanatheney for which authorisation had been obtained in 1881. He said it would be much cheaper to build than reconstructing the old line. His suggestion was not accepted either for practical operating or railway political reasons. 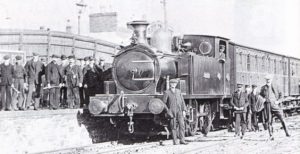 The order for the extension to Cwmmawr was granted and work commenced in October. The extension was finally opened for passengers on 29th January 1913 at a cost of £4,000.

Stephens then seems to have finished his work with the Burry Port. He had his hands very full particularly with East Kent and was no doubt glad to relinquish some of his responsibilities in South Wales although he continued to be involved in the nearby and ultimately unsuccessful, Gower scheme for another ten years.