Following reconstruction of the Bodiam culvert on the South side of the line attention has turned to the North side, in particular the connection between the railway’s pipework and that of our neighbour where a further blockage has shown up. 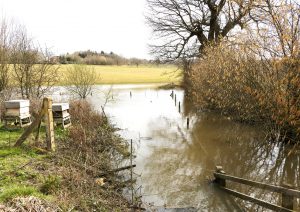 Flooding at the Robertsbridge end of Bodiam Station caused by a blocked under line pipe. Image Courtesy of Alan Crotty

The solution is to dig out the old connection which was smaller than the railway’s pipe (thus causing a restriction) and replace this with a new 450mm pipe. This should give good service for a long time to come.

Permanent Way Manager frim Halliwell looks on as Dave Hazeldine excavates to reveal the old pipework. This was last dealt with about 1950, dug by hand in those days. Image courtesy of Alan Crotty.