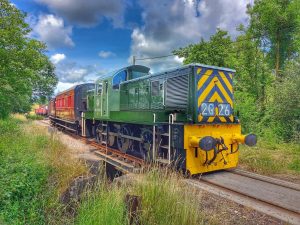 D9526 was one of 56 locos in this class built by BR at Swindon Works in 1964-5. Intended for pick-up and branch line freights, they were made redundant almost immediately by closure of many secondary lines in the late 1960s. Almost the entire fleet was sold for use in industry, with 23 going to Stewarts and Lloyds huge iron ore mines railway system around Corby and 19 going to the NCB’s North East Area.
D9526 was an exception and was sold to Blue Circle Cement at Westbury, where it worked until suffering serious engine problems in 1977. It was donated to the Group by Blue Circle and moved to Williton in 1980. After repairs and restoration work, D9526 made its preservation debut in 1984, working on the WSR for a further ten years. At the end of the 1994 season it was taken out of service with turbocharger and oil pressure problems. It re-entered service again in April 2003.  D9526 was stopped in 2017 and has now had a completely rebuilt Paxman 6YJXL engine installed.

courtesy of The Diesel and Electric Preservation Group